Red Beach Surf Lifesaving Club north of Auckland is using shipping containers for traditional – and not so traditional – uses on the beach this summer.

At its main site in Red Beach, the club is using three modified Royal Wolf shipping containers for storage while they renovate their clubrooms.

Further north at Pakiri, where the club operates patrols on the weekends, they are using a half-size 10-foot container as a temporary watch tower on the beach. The Pakiri container also doubles as a storage facility.

Red Beach Sport Manager, Paul Boocock, says it is a successful and growing club so having enough storage is always an issue and this has intensified during renovations.

The three 20-foot containers are being used for storage of surf skis, paddle boards, and other essential equipment used for training and as part of the club’s busy summer season patrol.

“When it comes to surf sport your success is about growing your membership and you can only do that if you look after and support your members. A big part of that is ensuring they have the best equipment to train with and carry out rescues – and the containers allow us to keep this gear in top shape.

“It sounds like a small thing but having something like containers that are safe, secure, and resistant to the elements plays a big part in helping our club grow and Red Beach’s winning formula.”

Craig Gledhill, from Pakiri, says the portability of the half size container is ideal for the beach terrain and it has multiple uses. 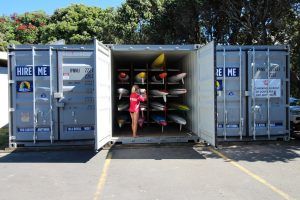 “As a tower it gives us a great view of the area between the flags and full visibility right up the beach, both north and south of the patrolled area. It’s the perfect observation point but we also use it as a First Aid post, and a secure storage space.”

He says for the past seven years all the life guards had as shelter was a pop up tent which was not ideal given the weather that can hit Pakiri beach.

“The bad weather conditions and exposure to the elements was impacting on our retention of lifeguards year after year because it was hard work. But now, on foul weather days, we are able to retreat to the container.”

“At the main clubrooms they’re using containers for exactly what they are designed for, whereas the Pakiri container is just a little bit of Kiwi ingenuity that provides a sound solution in a remote part of the country.

“It’s another example of the clever uses people are putting containers to – and shows their diversity and adaptability,” he says.