Shipping containers have been used to protect the public from earthquake debris in Christchurch – and now Royal Wolf containers are being put to the same use in Wellington.

Nine 20-foot modified containers – known as hoardings or gantries – have been placed outside the New Zealand Defence Force’s (NZDF) General Officer in Command Headquarters (GOCH) on the corner of Taranaki and Buckle streets.

The containers will protect passersby from falling debris in the event of an earthquake following an engineering assessment which revealed the unoccupied building was only 9 per cent in line with national building standards.

Paul Creighton, Royal Wolf Executive General Manager, says while hoardings are primarily used around construction sites they are also ideal for use around earthquake prone structures. 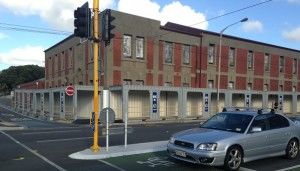 “They were the perfect solution for the GOCH building because they’re strong, extremely impact resistant and offer overhead as well as side protection from falling debris.”

The NZDF building was constructed between 1911 and 1913, and is situated along one of Wellington’s busiest roads..

Following the Canterbury earthquakes, one of the most high profile sites where Royal Wolf containers were used to support a building was at the Christchurch Basilica, with 20 containers stacked on one side of the church to stabilise the structure.

Shipping containers have also become a common sight on the streets of Wellington in the last year, with construction sites on Customhouse Quay and elsewhere on Taranaki St lined with hoardings.

Auckland is populated by hoardings, and most recently six container offices and lunch rooms have been erected on Victoria St as part of the City Rail Link construction.

Mr Creighton says with the continuing boom in construction around the country hoardings are one of the easiest and most practical solutions for managing safety on and around a construction site.

“On a practical level, the beauty of the hoardings is that they allow construction companies, who are working on what are often very restrictive inner city building sites, to reduce the amount of disruption around these sites.”