A record number of shipping containers are lining footpaths around constructions sites in Auckland, signalling the building boom is stronger than ever.

Modified shipping containers – used as everything from workers’ lunch rooms and first aid facilities, through to hoardings that provide safe pedestrian access around construction sites – are also a common sight on the streets of Wellington, Tauranga, and Christchurch.

“When you see containers lining the streets of our biggest cities then you know the economy is going well, and construction is booming,” says Paul Creighton, Executive General Manager of shipping container specialists Royal Wolf.

Auckland is populated by container hoardings, and as part of the City Rail Link construction, six containers have been erected to create a container building for workers on Victoria St. The two storey structure includes two worker’s lunch rooms, an administration office, two changing rooms, and a toilet and amenities building. 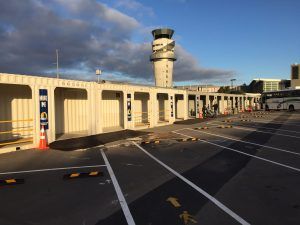 Just up the road, across from the Sky Tower, a run of container hoardings creates a pedestrian tunnel alongside the site of yet another construction site where the old Palace Hotel used to stand.

Mr Creighton says with the continuing boom in construction around the country hoardings are one of the easiest and most practical solutions for managing safety on and around a construction site.

“The beauty of the hoardings is that they allow construction companies, who are working on what are often very restrictive inner city building sites, to reduce the amount of disruption around these sites.”

Royal Wolf has a large number of containers located around the country, ranging from small two and three container configurations through to large scale installations, such as the 19 20-foot container hoardings at the new Novotel hotel site at Christchurch Airport.

Since the Canterbury earthquakes containers have become part of the city’s urban fabric, being used for supporting earthquake prone buildings as well as temporary worker accommodation, construction site offices, and hoardings.

Shipping containers have also become a common sight on the streets of Wellington in the last year, with construction sites on Customhouse Quay and elsewhere on Taranaki St lined with hoardings.

A unique project in the capital, made up of nine container walkways, is located outside an earthquake prone New Zealand Defence Force building on the corner of Taranaki and Buckle streets to protect pedestrians in case of an earthquake.