Over the past nine months, Wairarapa teenager Matt Wilson has undertaken an aid style building project for a hospital in Niue, located on a tiny pacific island, north east of New Zealand. When a solution was needed for transporting his work to the island, Royal Wolf donated a 20 foot container – and now the container has become a central part of the finished building. 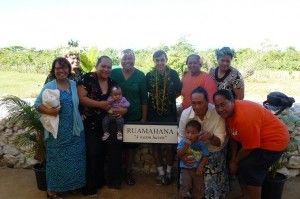 Here, Matt tells the story of how his project became a reality…

“It started out as a challenge from my dad. He called it an ‘educational adventure’ which involved taking my love of architecture and design and completing a project for a community in need.

There were a few conditions that went with it, like having an overseas element and being funded solely through sponsorship and donations.

The project became very real for me when the 20 foot shipping container donated by Royal Wolf arrived in Masterton in November last year. In many ways it was the most important part of the project. We modified the container to become a kitchen, laundry, and toilet block in readiness for use on Niue, and then we packed the building materials and supplies inside and shipped it to the island.

We raised around $63,000 for the project and it’s because of generous donations from companies such as Royal Wolf that this project was possible. And for two weeks in July, I found myself in Niue to build a special day bed area for elderly patients at Niue Foou Hospital in the capital of Alofi.

The day bed area, made up of five units, a landscaped garden, and a services block inside the container, will mean elderly patients have a comfortable and restful place to enjoy their day.

The main construction push over the first few days was getting the structural posts and beams in place for a stand-alone respite building. Then the container was moved into place opposite the respite building, and we set to work cutting holes in the shipping container for the prefab doors and windows to be installed.

However, we learned very quickly that cutting holes in a container is not as easy as it looks on You Tube. We took over a big grinder, and a cutting disc for every cut line we intended to make (plus a few spares), but we used up the whole lot in just one cut line. Luckily the locals came to the rescue.

The container is perfect for the Niue project because it is portable, adaptable, and most importantly, strong enough to withstand the cyclones and hurricanes that the island is prone to.

Despite the tight two week turnaround to get the job done, we made it. And the result was something that looks great, and is functional, practical, and reliable.

Hopefully this facility will give the elderly patients an even greater quality of life – and for me, that’s what makes the project complete.”

Royal Wolf is proud to have been involved in Matt’s project and supporting his efforts for what was a very worthy cause.